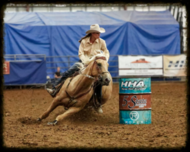 BAR THREE STABLES - SMOKE N SPARKS
​My wife and I grew up in Riverton, Wyoming.  My parents were Jake & Martha Korell.  Iva’s

parents were Leroy & Ellen Thompson.  Were both started riding at very young ages.  I got

involved with horses through my horse trading dad; Iva through a family friend, Eldon Olsen.

Iva and I met while I was driving chariot teams for Eldon Olsen. My main mentor was my dad,

Jake-for Iva it was Eldon and I.

I had my first stallion at age 17, so have bred horses for 54 years.  The love of speed bred Quarter Horses prompted me to be a breeder.  My first stud was a Gray Zantanon bred horse.  Then a couple of Appaloosa studs because of the color fad.  I then had my favorite stud of my life, Barjo Twist, along with Sir Poppy Go.   That brings us to our present stud, Smoke N Sparks.  “Sparks” is a grade 1 stakes winner with earnings of $96,101.00.  His sire, Dash For Perks, is a leading barrel sire and his dams’ sire, Shawne Bug, is a leading barrel broodmare sire.

Our broodmares are by leading barrel sires: Bullies on Fire, Frenchmans Guy, Dash Ta Fame, Etc.  As for a preferred bloodline, I really don’t have a favorite.  There are many barrel bloodlines to choose from.  At my age I don’t praise a large number of foals, but if I was to add a mare to my program it would be a Firewater Flit mare.

From February through July the AI breeding and cooled semen shipping takes priority.  My second priority is irrigating and putting up horse quality hay.  Fall and winter is spent making repairs in preparation for the next season.  We do the starting of young horses that haven’t sold.  When their talent starts to show, they go to our daughter, Dr. Kathy Korell-Rach, who makes winners of them.

The horse breeding business is tough.  My advice is not to stand a stud just on pedigree-this type of horse is a dime a dozen.  First prove the horse in your performance field.

The demand we have to ask of our horses today injuries are common.  I don’t think a career ending injury on a mare that has a solid record will reflect on her produce’s price.  Any record on the mare, whether race on in barrels, will add value to a foal.

I live in Wyoming, so hunting big game and fishing are at the top of our down time list.

When Smoke N Sparks is gone I will retire from standing a stud.  We have some high performing daughters by him that we will eventually raise some foals from.  I have not frozen semen on “Sparks”, so when he is gone-he’s gone.  I don’t think froze semen should be used when a stud is dead.  As to the cloning issue-this is even worse than froze semen.  Some of these clones are from geldings.  If the early owners didn’t think they were stud material, they shouldn’t be now.  Plus if they were studs, would they have the records they have now?  The owners of these clones won’t perform them for some reason.  The average horse person can’t afford the costs of embryo transfers-let alone cloning.  It’s a rich man’s game.