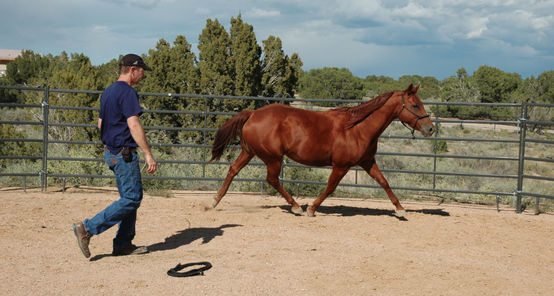 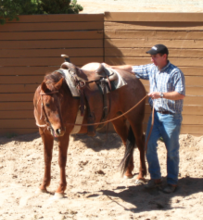 Checking for pain while in motion

​From the last trimester of pregnancy through the foal’s first month is a critical time.  It is extremely important for horse owners to know what to expect.  In this article I outline several important management points and concerns during this period.

The average mare has a pregnancy of about 335 days, but normal pregnancies occasionally last over 365 days. The defining aspect of the last part of the equine pregnancy is that the fetus gains size and weight most rapidly during this time, doubling in size and weight during the last 4 to 6 weeks. This means that there are great physical demands placed on the late term pregnant mare during this stage. During their last 30 days of pregnancy many mares are sluggish, act depressed, eat less and generally just look huge and miserable. As mares near foaling, there is often a plaque of swelling (edema) that develops from the udder forward along the under-belly. This results from interference with the mare’s circulation from the large weight of the pregnancy. Although this can become quite impressive as foaling approaches, it usually does not indicate a problem and resolves quickly after the mare foals. Often mare’s hind legs “stock up” or swell with the added weight, but this also usually resolves quickly after foaling. Read more...

CARE & MANAGEMENT OF THE GROWING FOAL -

This is the first of two articles on the young foal from birth to weaning. The purpose of the first article is to take a short journey from the separation of the umbilical cord through the first week of life. I touch on some of the important points of care and common problems you should be on the lookout for. One recurring theme is to observe the young foal carefully, and promptly discuss with your veterinarian any questions that come up. I advise my clients to be careful not to dive in to treat foals themselves unless they are confident in what they are doing. Sometimes well-meaning owners do more harm than good when they try to help their young foals.​ Read more...

​CARE & MANAGEMENT OF THE GROWING FOAL  -

ONE WEEK THROUGH WEANLING - PART 2

​In Part 1 of this article, I discussed management and veterinary considerations for the baby foal from birth through one week of age. In this article I continue with some important health considerations for the growing foal from 1 week old to weaning. The period through weaning is a critical time for the develop-ing foal. Healthy growth is critical for horses to reach their full athletic potential.

​Internal parasites can cause serious disease in horses without leading to external signs obvious to horse owners.  Parasite eggs and worms are tiny or microscopic and rarely visible in manure.  Significant parasite loads cause all sorts of problems for horses.  They can reduce immunity, cause gastrointestinal irritation and damage, reduce nutrient uptake and cause generalized unwellness. While these “hidden” problems are more common, parasite damage can also lead directly to colic and death.

Because of their hidden nature and their great impact on horse health, it is very important for horse owners to have a general understanding of the complex nature of equine parasitism and take an intelligent approach to parasite control.  In the last few years, evidence for worm resistance to common dewormers has emerged.  This is a serious problem and requires a re-examination of our current methods of parasite control in horses. Read more...

WHAT HORSE OWNERS SHOULD KNOW

​WHAT IS THE HOCK?

A horse’s hock is the evolutionary equivalent to the human ankle.  When looking at a horse from the side, the point of the hock is the backward-pointed part halfway down the rear limb. Over millions of years of evolution, the ankle and part of the foot of the early horse raised off the ground, leaving the horse walking on the tip of its third toe. This evolved into the hoof. The other toes and several of the metatarsals (foot bones) were lost in the process. This lower limb change was part of the adaptation that allowed the horse’s lower limb to become lighter and better adapted for explosive speed. Horses were heavily selected for great speed as they occupied the prehistoric plains. At that time, there was a great assortment of effective predators that culled any individuals that were slow. Read more...​ 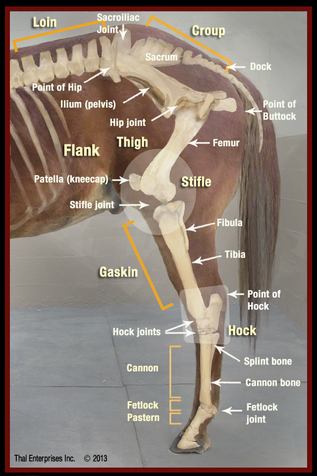 BACK PROBLEMS IN HORSES
By Thal Equine LLC

While back pain is poorly understood in human medicine, equine back pain is even more difficult to comprehend, diagnose and treat. We start with an animal who can’t tell us where or how it is experiencing pain. This animal is so massive that we only have access to the very “shallow” layers by touch, radiography and most other diagnostic equipment. The spine is buried up to a foot deep in heavy muscle and tough connective tissues sheets. Now introduce tack, the trainer’s and rider’s interpretations of the problem, and the placebo effect - and we are faced with a difficult and confusing problem to solve. Read more...