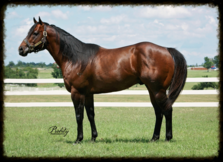 Royal Vista Southwest in Purcell, OK.  The partnership may be new; however, the

Lana grew up in the shadows of the greats like Easy Jet and Three Bars, for which her grandfather, racing legend Walter Merrick, is known.  At a young age she was an exercise rider at Ruidoso, NM, in some schooling races for Walter.  Loving this, she decided that there was a future for her in this line of work.  Met with some resistance from her maternal grandmother, Roberta Lester, she was told “Name another occupation where the ambulance follows you around on the job”.  She agreed to start college while continuing to help on the horse farm. Not only did she complete college, but she earned a Degree with Honors in both English and Physical Education.

Two time NFR Barrel Racing Qualifier (’87 & ’89), Lana also won WPRA Rookie of the Year in 1987 on Scoti Flit Bar and quickly stepped out of the shadows making a name for herself.  She now honors Scoti Flit Bars’ memory by awarding the Rising Star Award as a way of recognizing the year-long achievements of a horse that is making its first appearance at the NFR. The Rising Star Award is awarded to a first time WNFR qualifier to honor all the great ones that should never be forgotten and voted on by the top 15 barrel racers prior to the NFR.

Lana continues that legacy today by breeding and selling race and barrel horses with some of the best bloodlines in the business.  Most notably she is the breeder of Feature Hero (Valiant Hero x Illegal Feature, Feature Mr Jess).  He is the 2013 winner of the $2.8 Million All American Derby in Ruidoso, NM, the RICHEST RACE IN QUARTER HORSE HISTORY.  CRQH currently owns two full sisters to Feature Hero.

HEART OF THE CARTEL

Heart Of The Cartel (Corona Cartel x My Streakin Heart, Streakin Six) was purchased as a yearling with hopes of sending him to the race track then seeing what he could accomplish in the barrel pen.  He proved to be quite the race horse.  He was the 11th fastest qualifier to BOTH the All American Futurity AND the Rainbow Futurity.  He unfortunately had an injury that ended his race career too early.  He currently resides at Canadian River Quarter Horses and had an extremely successful first breeding season in 2013.

Heart Of The Cartel’s introductory breeding season was littered with the industry’s top mares. The list of mares bred includes NFR Round Winners, RC Back In Black and TR Dashing Badger, aka “Dolly”. He also bred AQHA World Champion, Gay Wooden Heart.  Add to the list a Ft. Smith Derby Champion, full sister to NFR Horse, ¾ sister to NFR Horse, 2 own daughters of NFR Horses, several graded stakes placed mares, and many more.

With the caliber of mares that he has been bred to in 2013 and the ones expected to breed in 2014, it was imperative that he be included in the Future Fortunes, Inc. and Triple Crown 100 Incentive Programs.

CRQH is beyond excited at the potential that this young stallion has to make his mark on the barrel horse industry.  He is by CORONA CARTEL, whose offspring have earned in excess of $40,000,000 and out of My Streakin Heart, by 2012 #4 Equi-Stat Leading Maternal Grandsire, STREAKIN SIX.  His pedigree, personality, and conformation are outstanding and expected to be passed to his offspring.

As the 2014 breeding season approaches, Canadian River Quarter Horses is preparing for another exciting season for Heart Of The Cartel.  His first foals will begin to hit the ground in February and are certain to make an impact!!  2014 Breeding Contracts will be available later in 2013.

Check out www.HeartOfTheCartel.com and LIKE us on FACEBOOK to stay up-to-date on this great stallion prospect’s future and to “Put a little HEART in your program”.