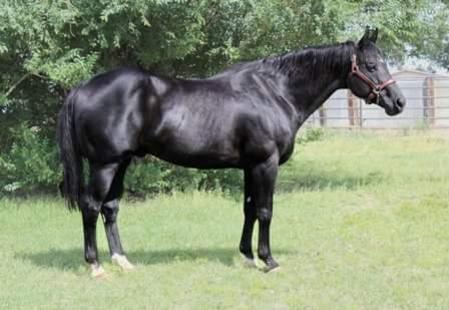 Smoke N Sparks, a nationally-ranked barrel horse sire of over $1.3 million in Equi-Stat progeny earnings, passed away due to colic complications at the age of 29 on April 18, 2021. He is laid to rest under the cottonwood tree at the end of the paddock that he called home for 24 years at Gerald “Jerry” and Iva Korell’s home in Riverton, WY; it was by this tree that he watched expectantly each spring to see new mares arriving. The Korells imagine he is still gazing at his ladies in heaven.

“Sparks” was more than just a horse to the Korells. He was a sire. A livelihood. A comrade. A legacy. Sparks put them on the map on a national scale. Bar Three Stables was a small, homegrown breeding operation that focused on racetrack and barrel horses. They had already been in business for decades and were creating exceptional equine athletes, but they blossomed into a countrywide known premier breeding facility. All of this was because of Sparks and some exceptional mares that produced hundreds of performers, including two-time WNFR qualifier, WNFR Go-Round winner, and Rookie of the Year RF Firefly “Cleo” (with Kelli Tolbert Thouvenell) and Better Barrel Races World Champion and Run for the Bonus World Champion Smoke N Sunshine “Shine” (with Kathy Korell-Rach). His progeny have won countless futurities, derbies, rodeos, high school championships, and college championships; they have set an abundance of arena records in the process. Read more...