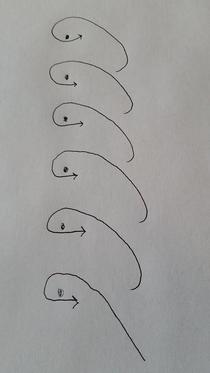 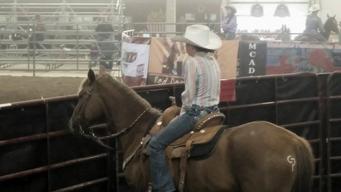 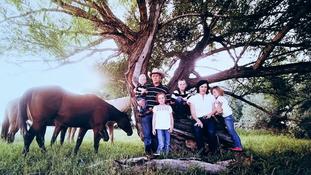 ​Last month I showed you an exercise we like to do with the poles--this month I am going to share another drill that we like to do where we also use the poles. I had my 13 year old daughter, Isabel work her horse, Lenny on this drill. Lenny is sired by a son of Nu Cash and has a pony mother. She started Lenny herself and they have been a great team over the last several years. Last year, they won a saddle for the year-end youth division of our local barrel association.

I have place three poles behind one of the barrels. They are spaced about 15ft away from the barrel. On a clock, one would be about the 1 o’clock position, one at 3 o’clock and one at 5 o’clock. I asked Isabel to work through at a trot because that is the gait that I do most of my training. After she finishes a turn at the first barrel, I want her to overturn and approach the one o’clock pole as if it were her first barrel, overturn it and proceed to the next. After all three poles have been circled, she can once again turn the barrel and then ride towards the second barrel.

The whole exercise can be repeated at the second barrel if you choose before going to the third. One might also choose to only put two poles at each barrel. After I have worked a horse like this once or twice I will always go back and let them simply do the pattern without circling the poles.

Just like last month’s pole exercise, I feel I can practice any skill that my horse and I may be working on at the barrel by repeatedly doing the same on each of the poles. I ask Issy and Lenny to practice moving forward in the turn on the first barrel with a correct shape and shoulder up. When she goes to the second barrel, I asked her to go ahead and let the horse think more about finishing the turn.

Again when any principle can be practiced and repeated several times in a row before going onto the next, I think it helps both the horse and the rider to learn. I have also found this exercise will really help settle and relax a horse that is anxious and too worried about making a turn. Making those extra turns around the backside of a barrel seems to take some stress away from a horse and teaches patience. Of course, as a horse gets more confident, they could also work at a faster gait.

POLE EXERCISES FOR BARREL HORSES - Part I
By Cody Hyde

My name is Cody Hyde and I live in Blackfoot, ID with my wife Paige and four children. We have a plumbing business and train horses. Keller, Isabel, Olivia and Chett are all active with the horses. Keller likes to rope, the girls are great little barrel racers and this year Chett is taking the pee-wee division by storm. I love bringing the young horses along and have had my own success at the futurities and derbies; but I am really satisfied when I get to see others ride my horses and go on to be successful.

The kids like to work the poles and so they are often set on the side or end of our arena. I've found some exercises that I like to do with the colts at the poles to help them on the barrels.

I will start by circling the end pole and then progress to the next pole in the same direction, rather than weaving through them. This way I can work on 6 right-hand turns (or left) in a row. I can train on any of the skills that I would want my horses to have in a barrel turn. For example, I want my horses to keep their shoulders up and their hips in while they move forward. I can ask for that type of a turn six times in a row.

I also like a horse to want to turn on their own. If I have a colt that isn't figuring that out, I will approach the first pole from the front and side at an angle as if it were my first barrel, go by the pole, and then let them turn back as if headed to the second barrel. After a few strides, pick the horse up and double back to the next pole as if it is now your first barrel. The repetition of doing this exercise six consecutive times will soon make a horse want to turn.

Another thing that I often drill into my horses is to shorten the stride and collect when I sit down in the saddle and quit riding them forward. I can also practice this as I approach each pole. Again, a horse learns by consistent repetitive cues; and with this exercise, I can reinforce any of those cues six times in a row.

If I want to continue with the same hand turn, I can completely circle the end pole and come back on the opposite side OR start over and come back through the poles in the opposite direction. I will also adjust my approach or angle so that it replicates either a first, second or third barrel type of turn.

BACK
View on Mobile