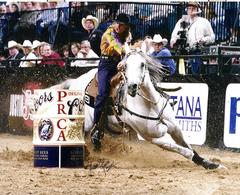 ​KEEPING HER HORSES FIT AND FEELING GOOD!
‘How does she do it?
By Kelly Yates

Currently she is riding the horse that is the son of her best mare, Firewater Fiesta. His name is Fiesta Del Rey who she calls Wizzard. As a result of embryo transfers, Wizzard has a twin named Blizzard, Fiesta N The Rey. As preferred, six out of the seven horses she currently rides are colts of Firewater Fiesta—she doesn’t take any outside horses except for her colts and has been quite successful on them.

During a busy hauling schedule I exercise a lot more out of the arena than in…. Some horses are very high strung—the more you ride them, the more you get them in shape, the more it takes to ride them down before you can compete; So it has a lot to do with knowing your horse, knowing what you’re feeding and knowing how they are responding to certain things as to how much you ride and don’t ride.  You may have a horse that’s high strung that you may just turn him down and don’t ride him as often …another one you may need to ride more and have them in better shape so they are stronger and quicker…it’s a lot to do with knowing your horse and what is required for exercising and keeping them in shape for the road.

ABOUT KELLY
Kelly Yates grew up with horses—when she was born her father put her on a horse as soon as they brought her home from the hospital. She now lives in Pueblo CO and although she did get a college degree, her love of horses won out. She is her own boss, raising, training and rodeoing horses as well as selling. “I love playing with them when they are young—It’s been my life.” I have a very supportive and encouraging family —parents, Dick and Jan Yates, brother JD and his son Trey.

I have a horse that is 5 that I think is better if you don’t ride him as much because he focuses a little better---you ride him a lot and then it takes that much more time before you can compete on them. Some-time you want to do the opposite. It also has to do with how they are bred as to what it takes to keep them in good shape--it’s a trial and error.

“Keep your horses happy and wanting to do their job—I don’t work a horse a lot, and I take them to the river, even the young ones. They enjoy it—it’s not like a job because I give them other things to do besides just the barrels.”

Also, I turn them out a lot—today it’s raining which is great.  I have a river down below that I stand them in a lot before I compete—water is great for their legs and inflammation. Sometimes turning them out, they exercise themselves—they run and roll and that all keeps their spine and things that might tweek their performance in line; and so you turn them out and it’s not like they aren’t exercising—because they do. Most younger horses get the exercise, but the older horses take more riding and conditioning just because they need to keep muscle tone, more than a younger horse that is playing and exercising by themselves without being rode—it’s nice to let a horse be a horse especially at younger ages.

FEED
It depends on an individual horse on what type of feed you use--we raise alfalfa and there’s a lot of protein in alfalfa. If it’s hard for some to get alfalfa, you need to feed more supplements as well as grain. Again it de-pends on your horse’s attitude and whether they are extremely high strung or not, as to the supplements you would use. I use Seabuck which is a natural pro-duct from the Himalayas, manufactured in the Ogden UT area. It has all the essential amino acids and works well to keep their coat shiny. It has a lot of uses for all horses…..it’s not a preventative for ulcers but helps relaxation in the stomach. It keeps them calmed down because if they’re calm in their stomach they are more likely to be relaxed. I use it on all my horses.

OTHER PREVENTIONS
It depends on where you are going--the conditions, altitude, humidity—all play a role in the types of preventative measures taken. I use electrolytes, mostly as a paste instead of putting them in their water or grain because I know they get it—sometimes they want to sift through things. I use the flair strips for opening their airways for breathing better—anything to make them feel better.

Shoeing can be an asset or a problem…you should work with your veterinary and shoer together.  It’s important to have good communication with the vet and shoer so that you are doing the very best thing for your horse. Usually once they are around three you definitely need shoes because of terrain and definitely once you start competing.

I do use magnets, not as often as most. Again the river is a big plus for me, I do ice them but I do like to stand them in the river because it’s like jets--it’s always moving. As far as chiropractors, I’m not against them but not all for it either—a lot of the ‘chiro’ comes in when a horse rolls and moves their back and head--it kind of puts things in line naturally that way.

Vibrating machines are not feasible for me--maybe for people who have bigger outfits—some of my horses wouldn’t even get on them. I’ve never swam a horse—heard good and bad about that— I’ve heard a lot of horses will fight it or go under possibly creating a problem they didn’t have before. I’m not against the aqua tread where they can touch the bottom, but don’t favor swimming a horse—I’m pretty particular about my horses and I don’t want them to get hurt. I know my breeding, so as far as the horses out of my mare, I’m a little worried about it. Again I’m fortunate to have the river that I can stand them in and have the flow of the water.

“For hauling I wrap them, especially if it’s hot!”

I’ll lead weanlings and yearlings into the river, making them step over things and taking it slow to let them get used to it. At first they are hesitant but then love it, pawing and laying down; and it’s relaxing and enjoyable and therapeutic too. Unfortunately not everyone has a river right there available.

For hauling I wrap them, especially if it’s hot. I’ll wash and rub them down and then wrap and put cold water in the wrap—cold water therapy is important. I also use Soft Ride boots--hauling is probably more stressful on your horse than running in a pattern because they incur a lot of miles where they can’t lay down and the Soft Rides have cushion in them which is great for their feet and legs. After I’m done running I’ll put a leg brace on them and keep their legs tight.

Another thought when traveling I will keep some grass hay up there so they don’t get bored or chew on things and every now and then they may want to munch. I also have air ride on my trailer—which is an extremely good thing for the horses because it’s not as rough for them.

When you’re traveling you need to know the best place to stop—I unload every 5 hours. If it’s really hot, I might go only a couple hours and stop and water them in the trailer. If you don’t have any electrolytes go get some Gatorade and put it in their water—you can do that anywhere. I also keep a salt block in my mangers which makes the horses want water more often so they are less likely to become dehydrated. I’ve been hauling for several years, so I know where I can go and how far and have a place to stop to turn them out. Let them run and play before moving on. I very seldom drive straight through, I try to break it up which is good for both myself and the horse.

“These procedures are what work for me…... It’s important to learn what works for you and your individual horse so you’ll have a healthy, happy horse and a successful future.”