​“YOU DO NOT HAVE TO BE YOUNG OR TOTALLY RICH

Futurity colts and barrel racing were always just my hobby. My husband and I worked pipeline construction for many years. I have ridden horses all my life growing up on my family’s small ranch in southeast Oklahoma. My dad worked in Texas and saw barrel racing for the first time at a rodeo there. He came home, set up some barrels and started a lifelong ride. I started running barrels at 9 years old and won my first belt buckle in 1959 riding a steer at the Little Britches rodeo in Denver CO.

I married my high school sweetheart in 1964 and our daughter Janet was born the following year. Janet ran track in high school and college and for 8 years I did not compete or even ride except for working cattle. In my 20’s I was lucky enough to ride for a few weeks with Joe Mordecai, a local horse trainer. He remarked that he never saw any one ride so good and so BAD at the same time; meaning I had a really good seat and feel but very little knowledge. I learned a whole lot from Joe, things that much later I would read in articles by Monte Roberts and other horse guru’s.

My first taste of futurities was in 1989, with very limited success. In 1991 I placed at the Lazy E and Ardmore Futurities and won The Old Fort Days Futurity on Salano’s Echo, a horse I bought as a 2-year-old, broke and trained. My next futurity horse was GK Clear Money. GK was my horse of a lifetime. He won the Derby City Futurity in Louisville, KY, the Drumright OK Futurity Champion, was Reserve Champion at The Lazy E Futurity, 3rd at the Old Fort Days Derby just behind The Key Grip and my sister’s horse Dial a Red Rooster. Later that year he won the BFA Derby and was the BFA Derby Horse of the Year in 1996. He also placed at several more futurities and derbies. I kept GK as my personal horse and he was a winner until retired at 18. He was put down last winter at the age of 24, a hard decision but the right one for him.

Other futurity colts have been Cheyennes Bullet placing 8th at the Old Fort Days Derby, Michigan NBHA Senior Champion, Drysdale Winter Circuit Champion, and the D & G 1D buckle winner. Our Bull had several futurity wins and places. Famous Ed was 2nd in the OKC Slot Race, had many futurity wins and places, a 3-time AQHA World Show Champion with Lance Graves and the Josey Jr World Champion with Madison Montchal taking the reins. Stoli With A Twist placed in several futurities. Fortune N Fame was a multiple futurity winner (Lance Graves as the jockey) and is now a standout with Kendal Owen. RLJ Czech This Out was the Bayer Select AQHA Champion, Amateur Champion at the BFA as well as several wins and places.

“I was also lucky enough to get to compete for a few months on my sister, Nancy Powell's super horse Dial A Red Rooster.  What a rush that was.”

SAVANNAH PEACHES
My current horse is Savannah Peaches a 5 year old futurity mare. She is sired by Identity Theft and out of Poco Jet Brandy (with a solid line-up of ‘older’ running blood). Peach placed 16th at the BFA Futurity for her first ever out. She placed 8th at Diamonds and Dirt being 2nd fastest in the finals, placed 3rd at Ardmore Futurity, won the Oklahoma NBHA State Open Championship, the NBHA Senior 1D Champion and placed 3rd at the BBR Futurity. She also got us qualified for the Bayer Select Senior AQHA Show in Amarillo next fall.

I am a widow and therefore I have to do all the chores and upkeep on my small ranch as well as trying to ride 4 head a day-this keeps me pretty fit and strong. Staying lean does help with balance, I am lucky to have somewhat healthy eating habits except for the darn Blue Bell Ice Cream-I have to fight that one. As I have said, with the 4D format people can have fun at most any level but to really stay at the top you have to work hard, keep yourself and your horse in good condition and ride even when you don't want to.

How do you keep costs down? You tell me. I let my prospects go bare foot as long as I can and if they have good feet with a good cup then I don't shoe until I really start hauling them. I invested in a good pair of nippers and rasp and I do my own trimming. I do not have fancy tack, other than a few things I have won. You don't have to have every bit from the tack store, and nylon headstalls work fine. I ride a 15 year old Ammerman saddle, a pro choice pad (both kept clean and oiled). I do have a nice trailer but for the people who do not pull far from home and stay several days at a time, just a good safe trailer is all you need. (I don't get far from my port-a-pot, even in my local colt trailer). As far as quality feed and health care there isn't much you can do.  I will say that you need to keep your herd numbers down.

Do you have advice on choosing a prospect? With horses being bred with barrel racing in mind there are some proven bloodlines, however for every good one Dash Ta Fame makes, there are 2 or 3 others…I just used DTF as an example. Also you need to know the quirks of the bloodlines and decide if they will fit your style. I do much better on a free running, smaller horse. So I try to buy prospects that will hopefully fit with my training style. I have had pretty good luck with Dash Ta Fame's but a lot of them are pretty big horses--they can be a little hot but I can deal with that. I cannot deal with one that is slow-footed and is slow to react to what you ask. But again that is just me. As far as conformation I look for low hock, short cannon bone, short back, long underbelly, good kind eye, good bone and feet. You don't usually get all that in the same package but do the best you can. I have paid as much as $15,000 to as little as $850 for prospects who have been real winners.

I don’t have any big secrets, just common sense, hard work and good luck. Pay attention to what your horse is telling you he can and cannot do. Remember, to learn the basics (both rider and horse) you have to learn to walk before you can run and this is true with training a horse. Don't overwhelm him by asking too much too soon or he will never like running barrels. More…There are lots of articles out there about training so I won't go into that. If a novice rider has the chance to take some lessons, that would be the thing to do. Many years ago I rode with a great horseman named Joe Mordecai and he taught me horse psychology, patience, consistency as well as the basics. I sure got some lectures but I have used his insight for many, many years.

I do want people to know you do not have to be young or totally rich to enjoy barrel racing. It is an expensive hobby but if you set achievable goals and strive to keep getting better it can be rewarding. 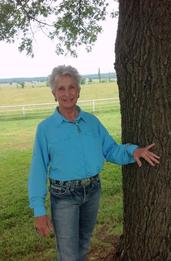 BACK
View on Mobile